THE BALD TRUTH BLOG TO CLOSE… NEW ‘WIND OF CHANGE’ IN THE STATES.... JERSEY IS ‘NOT A TAX HAVEN’… SIX MONTHS ON AND ROD BRYANS SPEAKS…. 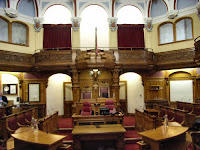 Four eye-catching  headlines – even if only one of them does have any truth in it. Come to think of it, a bit like the ratio of true and accurate answers you’re likely to get from some Ministers at a States ‘Question Time’?  The second, third and fourth headline, of course, do relate to today’s States Sitting. The first one I admit: yes,  I did just put it up to give everyone’s least favourite internet ‘stalker’ a tiny  bit of excitement in his sad and bitter life of trolling and posting cowardly abuse.

But first to a real man the like of which we could certainly do with a few more of today….

By this I mean not only a very genuine, sensible and ‘up front’ man who was passionate about social justice and looking out for the least well off. But just as importantly the quality of man that would not be ‘rolled over’ by the Establishment Party bully boys who dominate the Executive today knowing the cost of everything but the value of nothing.

Believe me: the unions and public sector generally are going to have to find some of René’s backbone very soon or they will be the ones being made to pay for the stupidity and incompetence of the Establishment party’s policies for a very long time…

A final point on this. Having received a few e-mails on the issue I can say that: yes, I too fully agree that it was sickening to see the Jersey Establishment Post now gushing about what great men René and the late Senator Norman Le Brocq were - when they had so little good or true to say about them when they were in their prime and politically active. But then again – what’s new?

When will this new Assembly come to life?

I think it is fair to say that regardless of the clichéd nonsense about ‘inclusive’ and new, ‘positive’ government etc spouted by the likes of Rod Bryans – making his first contribution to a States debate – ANY debate – a full six months after his election the Strategic Plan today really summed up what a mess this new States is in.

Indeed, when you actually get Officers (who don’t officially have or give opinions) confidentially confiding in you as to what a worrying, ‘dumbed ‘down, shadow of a democracy our States has now become since the 2011 election you really have to conclude that something is very wrong in Jersey politics. And you can’t even blame it all on the pathetic and totally unwarranted deferring to ‘Sir Philip’ sycophancy as some people would try to say!

Hardly any questions – again. Hardly any attempts from the new Members (with very honourable exceptions such as the excellent Deputies John Young and Richard Rondel) to hold the Great and the Good of the Executive to account; or even to contribute to debate - again. Et cetera  But more on this important issue in a full length subsequent post..

To a degree I felt some sympathy for Chief Minister Ian Gorst with this Strategic Plan. At least he had tried to – and succeeded to be fair – in cutting down much of the superfluous spin, padding and downright lies traditionally put in Strategic Plans in the past. But the problems with what was presented were very well articulated by Deputy Geoff Southern.

Still nothing about the real, core issues that underlie all of the problems that we need to overcome if we are to move forward to a genuinely ‘inclusive’, ‘fair’ and socially cohesive society. But though Senator Philip Bailhache got very tetchy with Deputy Montford Tadier during one of his brief sojourns into the Chamber the fact is Montford too was pretty much spot-on: this Executive not only know we aren’t going to get a ‘fair’ and genuinely ‘equal’ society under their redundant ‘free-market’ and ‘elitist’, ‘them & us’ ideology – they very likely wouldn’t want it anyway!

As for the lack of amendments – Geoff Southern really summed this up very well too after I reminded him just how many there had been last time, when he said that actually one almost could not amend the plan because it was so fundamentally wrong in its starting point. Sadly exactly the way I felt this time myself.

Tazers – No we don’t need every officer to have them…

It is funny but chancing to be talking to a constituent last week when the news came in about part of St. Helier being sealed off and flooded with armed police because somebody was apparently running amok with a screwdriver we both looked at each other and said: ‘this is being used to justify pushing through Tazers!’ That these devices should probably be available I am quite happy to accept may well be true.

But the argument that all of our police need to carry them is a complete, and in my view, ultimately dangerous joke. If we are going to have them then let’s just have them available to the armed response teams. Intending no disrespect whatsoever I would also absolutely not, 100% ever agree to these being made available to our Honorary Police. To this degree I was consequently very pleased to find the two Constables I spoke to about this issue wholly agreeing with me.

As someone who also used to do crowd control at premier league football matches back when I was at University (initially in the hope of being able to catch a few games I can now admit!) the key to dealing with this type of thing really is, at the bottom line, proper training. Most of my friends in the police agree with this view in private it is interesting to note.

And as one of them said: ‘Suppose we get these Tazers. What happens when the criminals up the ante? Do we just escalate what weapons we want to carry as police?’ I will consequently be very interested to see what the final outcome on this issue is.

Hey…I wonder if they will start ‘Tazering’ people who attack pensioners in their own home with heavy catapults and steel ball-bearings; go for a stroll with swords and throwing knives – maybe stockpile a few petrol bombs? Nah – that would be just plain silly, wouldn’t it…

The Sharp Report. No wonder the Executive don’t want ‘backbenchers’ to have it…

I won’t say too much on this issue today because having read the report at length (having had to acquire it from a Child Protection website in the UK let us not forget having been blocked by our ESC Minister in getting it officially) there are a great many things included that are still very relevant and need consideration and action today.

All I will say for now is how utterly sickened I was to read of a former Vice Principle of Victoria College being stated as arguing that a colleague of his who had been found to ply boys with alcohol and then abuse them should apparently be allowed to both ‘resign with dignity’ and ‘work out his notice period’. Even worse, arguing that he felt no pupils ‘would be at risk’ if the offender was allowed to continue teaching in the classroom! Can the judgement of such an individual have ANY credibility whatsoever?

I also really must add that I found the fact that the current Minister would not condemn such a stance and confirm that it would not be acceptable today both disappointing and rather worrying. Has so little really been learned? A school’s ‘good name’ is worth less than nothing set against the safety of those in its care. Really, if the community and more importantly the victims of abuse are to have any confidence in the Haut De La Garenne Committee of Enquiry then this just isn’t the way to set about it.

Finally, a big ‘Thank you’…

I really couldn’t finish this post without saying a big thank you to all of those people who have sent in messages of best wishes and support for Shona and her 87 year old Grandmother who is very ill in Scotland. Though things are not looking very good they are still very much appreciated and I will ensure that they are passed on.

Having had to travel at short notice on Monday Shona’s question about the compensation for abuse victims on Tuesday obviously fell by the wayside. She has asked me to assure all of those people who had been in touch about the issue that she will ensure the question gets answered at the next sitting.