THE BAILIFF: A ROLE SYNONYMOUS WITH THE CORRUPTION OF ‘THE JERSEY WAY’ 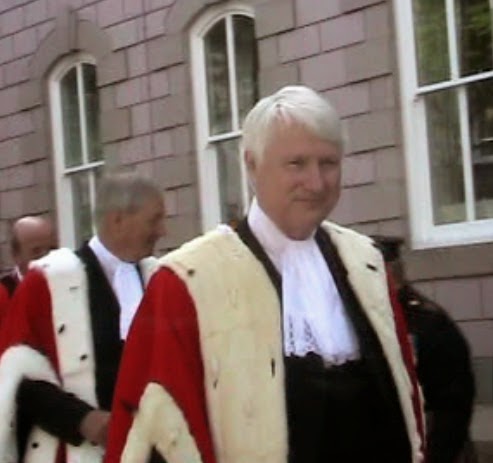 It really should come as little surprise to learn that ‘Sir’ Philip Bailhache has awoken from his political slumber following the debacle of his sabotaging of the reform referendum to now try to do the same with the latest moves to put an end to the non-ECHR compliant anachronism of the role of Bailiff. Bailhache’s whole career after all – through both his time as Attorney General, Bailiff and now as a Senator has, in my opinion, been marked by his utter contempt for justice and democracy.

Like his brother William his name is now synonymous to an ever-creasing number of people with child protection failures and the application of ‘law’ only according to who a person is. Indeed, at a time when generations of Establishment cronyism and corruption to ensure our Island was run as a private club to benefit the rich and powerful at the expense of the wider community is finally in sight of its Endgame simply due to the Party having run out of credible ‘big hitters’ to run the show Bailhache is the last desperate throw of the dice as I observed back in 2011.

Yes the political Left has failed over these long years to put aside what have generally been inconsequential differences of political priority to put together a strategy to outflank the endemic corruption of the ‘Jersey Way’. Just as the wider community who have become second class citizens under the ‘Jersey Way’ and its appeasement of Finance at all costs have failed to rise above the culture of fear; the apathy of moans and non-political participation to do the same.

Yet the reality is the Establishment Party is finally facing its first glimpses of its nemesis because of things even its corruption and bullying cannot control: time and the reality that in a shrinking media world the anachronisms which have helped maintain its power can no longer be talked away with smarm and a dry sherry.

So now we see The Man Who Would Be King – surely King Philip the First and Last - desperately tilting at windmills to sustain the ‘Jersey Way’ and all it allows a little longer by attempting to defend the indefensible position of the Bailiff. A role let us not forget that has absolutely no mandate from the public. A role that allows an unelected judge to control what those who have faced and won election to the States Chamber via the public can say or put forward as policy proposals.

Hells bells - a role that allows these unelected judges – and as the recent past as shown us so dramatically not even ones who uphold justice for all as per their Oath – to strut about in ridiculous red cloak and gilded bog chains as the Island’s ‘First Citizen’ assuming the position afforded some kind of President!

And yet Philip Bailhache wants to keep the anachronism in place. Of course his aforesaid brother, William has already been announced as the next Bailiff - even before the vote set for later this month! But the key reasons why really do not any longer even need to be spelt out. Its removal will be the final cutting away of the critical first leg of the three-legged Establishment Party stool upon which the fat, bloated backside of the ‘Jersey Way’ squats. Once gone the final and long-overdue fall to earth will follow as inevitably as night-time follows day.

Yet to distract from this Philip Bailhache instead waffles via the State media about the importance of maintaining ‘tradition’! Really, Sir Philip? Leaking through the heady aroma of a nice Chateau-Neuf-du-Pape in the luxury of the Atlantic Hotel perhaps do not even you detect just the faintest whiff of sickening hypocrisy in the air? Perhaps then I should give you a little clue: Jersey's link to the Diocese of Winchester. Wasn’t that built around 500 years of ‘tradition’ – yet you threw it away without a thought in your desperation to dodge the holding to account of yet another member of the Establishment Party – the Dean - who had also failed to act on abuse.

Really, Sir Philip have you learnt nothing in your overbearing arrogance since as Attorney General you allowed the convicted paedophile Roger Holland to remain in the Honorary Police setting in motion a reign of abuse on young girls?

Have you learnt nothing since - as Bailiff - you illegally banned an elected Member of the States, former Senator Stuart Syvret from taking up his seat in the States for six months?

Have you learnt nothing since as Bailiff and Chairman of Victoria College you happily allowed a Vice-Principle – John Lyndon Le Breton - with a proven history of disregarding evidence against yet another predatory paedophile, Andrew Jervis-Dykes to be rewarded with a job as a Jurat ‘administering justice’ in your own Royal Court?

Indeed, have you learnt nothing since your grotesque and disgusting Liberation Day speech where you claimed global media reporting was the ‘real scandal’ above the appalling suffering of the victims of Haut de la Garenne which your generation of power holders had allowed to come about?

No, Sir Philip, quite clearly you have not. Or perhaps the truth is that you simply revel in all of this because all that matters is trying to prop up the ‘Jersey Way’ and ensure the Establishment Party hangs on to power a few more years no matter what? Either way the bottom line is that although I believe the craven deference afforded you by so many of the poodles currently passing themselves off as politicians will ensure you win the vote on the Constable of St. Helier’s re-working of Shona Pitman’s proposition to replace the Bailiff ultimately you will fail.

Indeed, if I may paraphrase a favourite rock song ‘This isn’t the end – but at least we can see it from here’. Justice eventually comes to all. Even in the tiny Neo-Feudal State of Establishment Jersey. Sleep well…

A WAKE UP CALL FROM HISTORY

I was fascinated in reading about a man, Salvador Allende, who is not only a personal political hero but also without doubt one of the most important champions of democracy of the 20th Century to stumble across details of a 1920’s poster issued by the then FECH Chilean students’ federation newspaper ‘Claridad’ (Clarity). Indeed, given two highly symbolic events of the past seven days here in Jersey the message contained really could not resonate as being any more relevant:

Firstly, the final launch of the Committee of Inquiry into the decades of horrific child abuse concealed from Jersey’s ordinary people by years of corrupt Establishment politicians, ‘law lords’ and media sycophants. And equally, of course, the final ‘heads-in-the-sand’ decision to commit us to the huge burden of a Financial District that within twenty years will be as redundant as the crumbling ‘Off-Shore’ tax evasion industry on which it is based.

For the poster (the words of which I reproduce below) sums up in language as adroit as it is blunt the cost of what happens both individually and as a community when, as Plato so famously highlighted, the ordinary populace fail to engage in the political process or look beyond the lies and motives of those who would tell you theirs’ is the best and only way.

Indeed, replace the names of the Chilean newspapers of the 1920’s quoted within the poster with the Jersey Evening Post, Channel ITV and the local BBC and the words of 94 years ago could have been written specifically about the Jersey of 2014.

The words sum up not just Haut de la Garenne and so many other horrors which were allowed to happen by this failure of humanity but also how the victims/survivors, the two brave police officers who finally set out to drag out the truth; and, indeed, the handful of Leftist politicians and bloggers who stood tall alongside them were then trashed by the Establishment and their lackeys to protect the guilty.

Just as it sheds light on how so many ordinary people continue to be sleep-walked down the crumbling, neo-liberal capitalist road to a moral less Nowhere by the same ‘leaders’ when the evidence of what lies ahead are all around to be seen if only one brave enough to look and see. Read the words of the poster; open your eyes and take heed.

As for Salvador Allende, a great leader whose democratically elected government was destroyed by the mass-murdering fascist General Augusto Pinochet at the behest of equally corrupt US President Richard Nixon – if only we in Jersey had a leader of his stature, vision and commitment to social justice to lead us away from the edge of the Abyss today! As we haven’t I guess it is up to us to save ourselves...

‘You are a coward. Yes a complete coward. And don’t think that we are saying this to attract you to this poster. No. Quite simply, you, whoever you are that is reading this, have you noticed how you live? What is it that you do every day? You are silent when convenient. You always ingratiate yourself with the more powerful. You opine like everyone else. When have you ever raised your voice against the scandalous infamy around you? When? Tomorrow or maybe the day after you may die and what purpose have you served? Do you know what the society we live in is, this capitalist society? Do you know what the society is that we push for and that you try to delay? No doubt you think the same as ‘El Mercurio’, ’La Nacion’ ‘El Diario Illustrado’ etcetera, the same as the newspaper you read every day. Learn for yourself man. Don’t be a puppet. Have some shame. Use your own head, that’s what it’s there for. Find out. Investigate. Don’t be fearful. And don’t leave calmly after reading this. In vain you try to be deaf. You are a coward, at the mercy of he who pays you best, or shouts at you loudest. Don’t fool yourself. When have you ever said anything that could jeopardise you? Because of docile individuals like you the world is unliveable with swine.’

Do you want to be on the easy side or on the side of what is right? I personally am proud to say that no matter the cost I have always stood – and will continue to stand – on the latter.