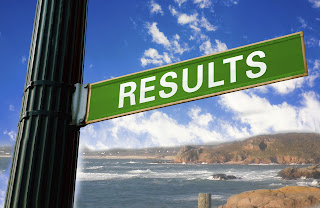 Don’t ask me why but I’ve long wanted an excuse to start a post with ‘a funny thing happened to me on the way home last night’. This past Tuesday evening finally provided me with the chance.

As some people who know me well will be aware, each week I go down to my Mum’s house and make up her cancer drugs; ensuring that they are all organised into the right compartments and dosages etc. I also usually try and take our adopted dog with me - both Mum and canine being equally fond of each other – and it was why walking said dog on La Mare beach after my ‘drugs’ visit that was to provide me with the subject matter for the first part of this post.

Nearing the steps to the car-park I was hailed by a couple of young women sitting on the sea wall. Surprisingly (not!) the reason for this turned out not to be my boyish good looks. No – these two young women were actually students and, sharing what was obviously a well-earned bottle of champagne, just wanted to share their excitement and happiness at having just learned that they had both secured a university degree!

Anyway, congratulating them both and stopping for a chat – the degrees were in Zoology and Media so they told me – something they said also really made me quite sad as it seemed to say so much about some people’s attitude to the young. For the students (former JCG girls so they said) informed me that though they had been calling out to each and every person who had passed by, on what was a beautiful and warn summer evening, not a single person apart from me had bothered to congratulate them let alone stop.

Such achievements as degrees are surely what we want to encourage our young people to strive for. So how very, very sad that nobody could be bothered to stop and offer a quick ‘well done and good luck for the future’ to these two nice young people. After all, far too many people are far too quick to jump on the bad behaviour of a small minority of Jersey’s youth – let’s hear some praise when it is so well deserved too!  The girls (their description) told me that like so many young people they would be heading off to the UK for their future, not staying in Jersey, so once again – the best of luck to both of you!

Nevertheless, chatting to these students still gave me a much-needed boost coming as it did after another dismal day in the States. A day when once again the staggering cowardice and total unwillingness of Establishment Party politicians to stand up against what is clearly wrong had once again been demonstrated.

No, I’m not talking about pretend Chief Minister Gorst again failing to pull in the reins on real Chief Minister Bailhache’s wholly unwarranted ‘fact-finding’ jolly to Barbados. An investigation that could be achieved far more thoroughly and at a whole lot less expense via Skype; e-mail or even video-conferencing, as I said on Channel TV today.

I’m not even talking about the ‘answers’ to my questions to Economic Development. Which had, of course, revealed that the much-trumpeted excuse of a ‘great many more ‘witness Statements’ being undertaken by Jersey as opposed to our Guernsey cousins having fully justified our ten times higher legal costs in the LVCR court case was actually tosh. The number of witness statements was actually 12 – and unless we had to send a lawyer right around the world for each and every one the sums really just don’t add up. Well, not in the real world anyway!

No. I’m talking, of course, about my revelation of the deeply worrying fact that in Jersey people who make the conscious decision not to act as they should upon reports of heinous child abuse at an Island school – Victoria College – and are subsequently highlighted within the Sharp Report are allowed to sit in judgement of others as Jurats in Jersey’s courts!

A ‘hypothetical’ matter? Well, you might think so if you had listened to Chief Minister Gorst’s pathetic ‘we have to be careful about allegations’ response. But no – we are talking about cold, hard FACT. FACT at that which has gone unchallenged by anyone in power – whether Chief Ministers; ‘senior’ politicians; Bailiffs or Attorney Generals - for 14 long years! The questions have to be quite simply: HOW and WHY?

After all, shouldn’t any person finding themselves up before a court – perhaps quite innocently – be able to feel 100% confident that those who are going to judge them; indeed, hold the power to change the whole course of their lives perhaps, should be of sound judgement and hold a clear commitment to justice and doing what is right?

Well, how about reading this little extract from the Sharp Report Page 23, Paragraph B35 and then making your own mind up…
‘On 5 August, Mr. Le Breton wrote to Advocate Falle. He said that the police did not as yet seem inclined to press charges and that there may indeed be no case to answer. He went on to say that Mr. Jarvis-Dykes had served the College in an outstandingly competent and conscientious way. He accepted that there was now evidence of misconduct on off island trips and that in his view this was now a resignation matter. He asked that Mr. Jervis-Dykes be allowed to leave with some dignity and suggested that the Governors consider a resignation from Christmas or Easter. He did not believe that his (Jervis-Dykes) continued presence teaching Maths and as Head of Maths would place anyone at risk. “In the absence of a police case, the resignation would be seen as an inevitable consequence of an intolerable situation caused by an unsubstantiated allegation.” (Mr. Le Breton had not taken up the Headmaster’s suggestion in June that he might view the videos* and he was not aware that Mr. Baker had seen them)

Is this the kind of sound, fair or rational judgement that should enable a person to sit in a court as a Jurat ‘judging’ others – ‘judging’ right and wrong? I think not. Hell, I KNOW not! Read the extract again. A paedophile being described as having served the school ‘in an outstandingly competent and conscientious way’. Requesting that the paedophile be ‘allowed to leave with some dignity’! Refusing to actually look at the video evidence…

Frankly, the only word for it is incredible. Actually, other words do come to mind. But I won’t use such language on my blog out of respect to my readers.

Which brings me neatly to the media and what passes as ‘journalism’ at the Jersey Evening Post and so forth. On Tuesday I revealed information that really should have led to a media outcry and been front-page news; lead stories on TV and radio etc demanding an investigation – and as a constituent said: would have in any ‘normal’ place. Yet it did none of this.

Nothing on TV or radio so I am told. Certainly I have not been approached for any interviews on the subject by anyone. And in the Jersey Evening Post? Just a watered down article that completely shifted the focus away from what my questions were quite clearly fundamentally about. Oh, and a claim that the newspaper had reported ‘extensively’ on the Sharp Report back in 1999.
Well, sorry chaps. But your ‘extensive’ reporting covered none of what I revealed in the States. Not a word. I checked. Yet why am I not even remotely surprised…


As the late Malcolm X said all those years ago:

Throw in most of the other mainstream media ‘journalists’ and I suggest Malcolm X’s quote sums up a pretty fair image of an ‘average news day’ in Jersey. Is it fear or are you really just ‘on message’ to the ruling Establishment Party? Come on, you journalists – let us know. I really think you should – after all, Jersey’s media has had full access to the Sharp Report for years longer than I have…

To readers - Keep the Faith – However hard it might be!