PRINCE CHARLES IN JERSEY – HOW MUCH DO ROYAL VISITORS REALLY KNOW ABOUT THE ISLAND’S HUGE DEMOCRATIC DEFICIT? 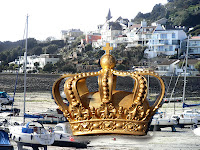 If this post seems an odd one to put up a couple of weeks after the event then the only excuse that I can offer is this one. It was motivated by a discussion over sharing a quick beer on the way home with a couple of constituents; after the excellent Havre des Pas Seaside Festival on Sunday evening.  Ultimately in fact by a comment from a young woman contrasting the smiles of ‘ordinary’ people at this event; with the smiles of the self-proclaimed local ‘Great & the Good’ that were largely given pride of place two weeks ago to pretend that THEY were the true face of Jersey - and what has made it so special. Or used to.

The question raised was certainly a good one.

Just how much will Prince Charles or his Lady wife really know about the actions of so many of those who smile and preen - but are actually so desperate to hold on to the power they have hijacked in our Crown Dependency of Jersey for so many decades? Not only this, but as my constituent’s partner added ‘how much will the Royals really care to try and find out’?

To this the obvious further addition I suggest might well be: and how much effort would they then make to try and see matters were put right if they did come to know of the cancer eating Jersey from the top down? After all, ‘Old Gods almost dead’ these local Establishment Party ‘Big Wigs’ may be but the damage that they have caused – and continue to cause - is staggering.

One would like to think that there would be a Royal response.

Of course, the Royal visitors are meant to be strictly apolitical. Yet you do have to ask yourself this further question. If Senator Philip Bailhache could simply duck in and out of this constraint every time he wanted to meddle in democracy and maintain the status quo whilst Bailiff - then shouldn’t our Royal Family also be able to do just that when their subjects are quite clearly being sold down the river by people who are as arrogant, elitist and vested interest-driven as they are generally inept at their jobs?

For given that all too many local people would now suggest that Westminster’s constitutional commitment to ensure ‘good governance’ here appears to be largely no more substantial than all but forgotten words on a faded piece of paper; shouldn’t the Crown to which Jersey has for so long pledged loyalty actually be doing a little more ‘top down’ to make things right?

Let’s consider just a handful of examples from recent times…

Do the Royals know that in Jersey our independent Electoral Commission has been stolen away from us by people who have already decided that fair representation and political transparency comes a very poor runner-up to ‘tradition’ and secrecy?

Do they know that victims of appalling abuse whilst in the ‘care’ of the States have their evidence ‘go missing’; or that even when an individual is named by more than a dozen people the Attorney General of the day won’t take the matter forward as in ‘the public interest?

Do they know that in Jersey individuals who are savaged in Official reports for diabolical failings in preventing child abuse at Victoria College are allowed to sit in judgement of others as Jurats for 14 long years without anyone ‘at the top’ saying or doing anything?

Do the Royals know that if you say the wrong thing; look under the wrong stone you can have your career threatened; ended – even have illegal police raids on your home?

Do they know that ‘anti-establishment’ politicians in Jersey actually get prosecuted -  make that ‘persecuted’ - for helping a few elderly/disabled people register a request to later receive a postal vote (a breach of both Human Rights and the law in every other democracy under the sun)? Whilst other Establishment candidates who did exactly the SAME and even in the SAME district are not prosecuted?

Do they know that in Jersey when it suits the Establishment Party only a ‘prosecution’ case will be heard and the defense just doesn’t count in case it undermines the desired result?

Do they know that whilst we have the incredible generosity of someone like David Kirsch in the island we also have dozens of multi-millionaire tax dodgers (costing other jurisdictions millions) who are allowed to pay less tax here than their gardeners and domestics - and yet do nothing to warrant such preferential treatment? All of this, of course, whilst the Establishment Party of 2012 spin their hollow propaganda about ‘all of us’ needing to ‘tighten our belts’ as much-needed frontline public services are slashed?

Do the Royals know that Ministers can be proven to have lied in the States to justify suspending a Chief of Police – yet too many Members are still so spineless they vote to keep such news secret from the public?

Do they know that if you want to find out the truth (and see some decent journalism as well for that matter!) you are better off coming on here or on the Citizens’ Media sites of Voiceforchildren, Rico Sorda and a growing group of others – rather than reading the likes of the Jersey Establishment Post; or tuning in to local TV or radio?

No. The Royals probably don’t. But it’s long past time that they did know of such things. These and a whole lot more. It’s up to us to make sure that they finally do. If only because we can then judge them on the consequent response to helping to set matters right.